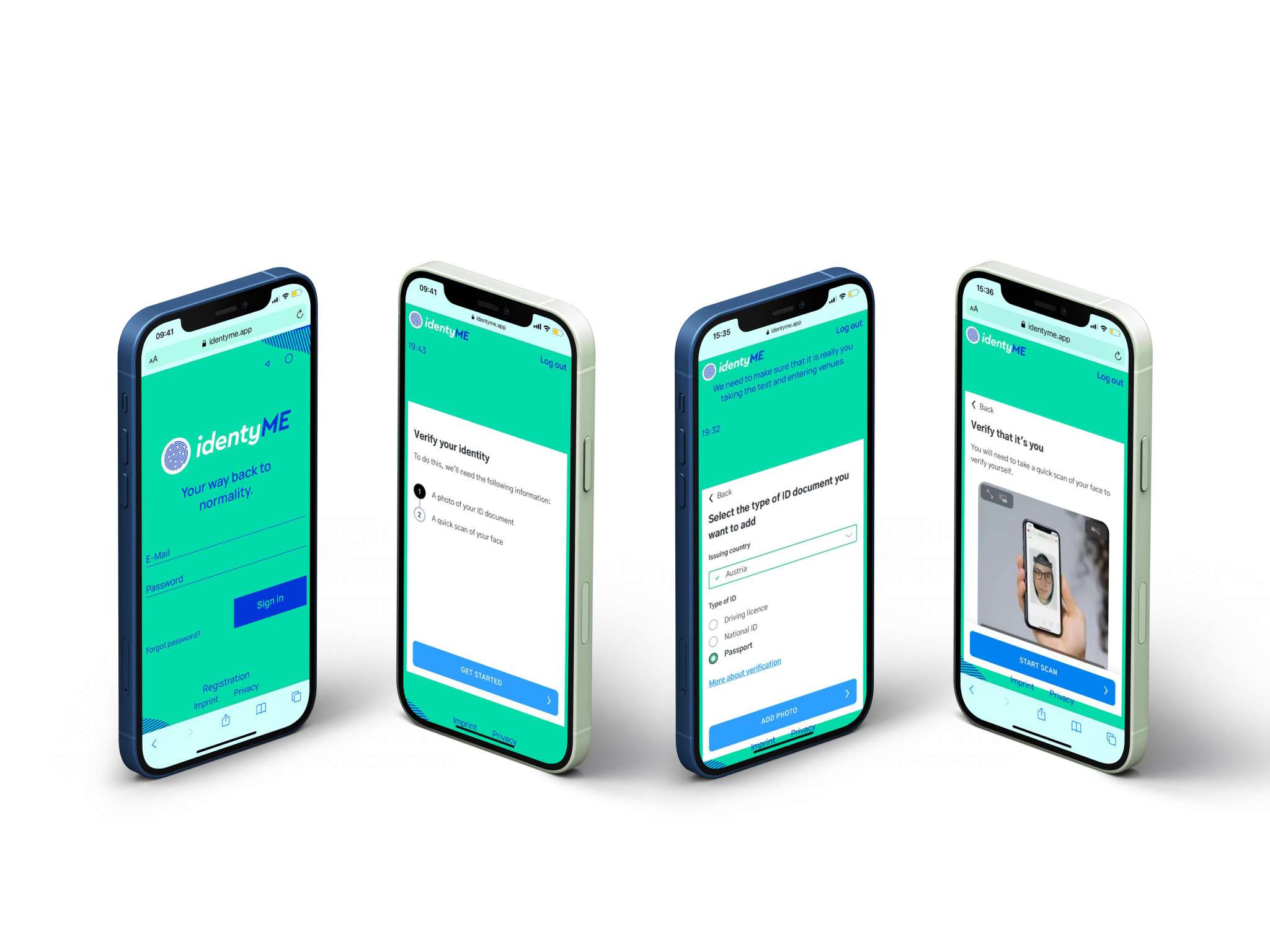 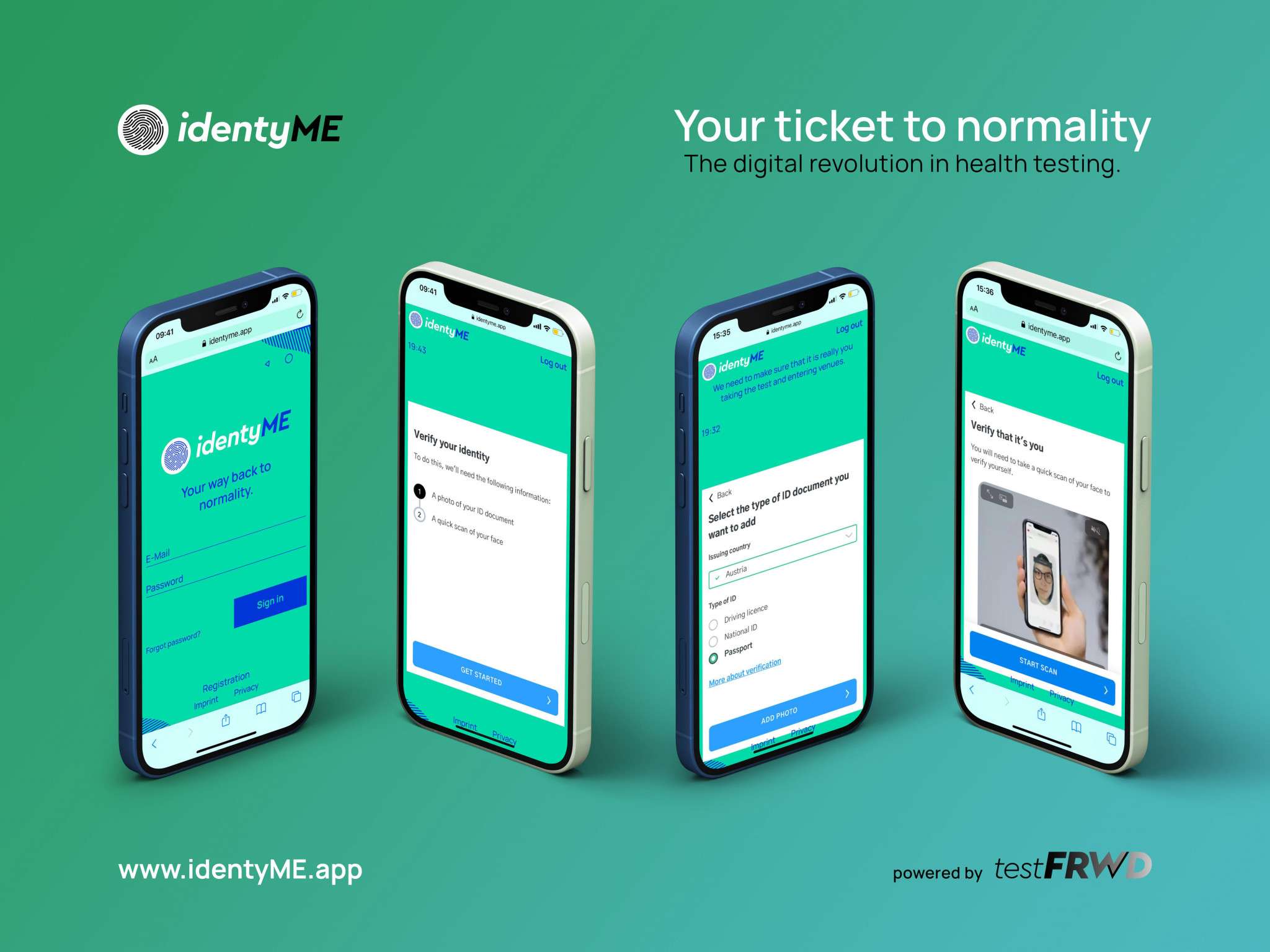 Vienna, Austria, September 2021 — testFRWD, the Austrian startup providing AI-powered solutions for self-certifying COVID-19 tests, teams up with the Lufthansa Group to bring at-home test kits integrated with the former’s identyME app to air travelers on flights between Germany and Austria, with plans for rapid expansion to other EU states and the UK. Passengers flying with Lufthansa, Swiss International Air Lines, and Austrian Airlines can now order identyME-compatible test kits from the providers featured on airline websites. By using the kits, passengers can get a certified result at an affordable price, without having to go to a designated test site.

The EU Digital COVID Certificate officially went online July 1, allowing the bloc’s nationals to fly between EU member states, as well as Norway, Switzerland, Liechtenstein, and Iceland. Negotiations are underway to expand the program to a number of non-EU nations, including the U.S. and the UK. The reopening comes at a time of soaring concerns over the new delta mutation of the virus, now active in a multitude of countries, including EU member states. With the new strain seen as possibly more resilient to vaccines, rapid and accessible testing becomes crucial for EU’s skies to reopen, breathing new life into the pandemic-struck airlines and tourism industries.

testFRWD works to fill this gap by developing and launching identyME, an AI-enabled app that allows its users to self-certify their COVID tests with the compatible test kits. When ordering an easy-to-use kit from distributors featured by the three airlines, the passenger would only pay between €5.40 and €14.95, while a rapid PCR test at the airport would usually cost several hundred euros. They are offered as an option to Lufthansa Group passengers looking to travel between countries which officially recognize AI-based self-certified tests, a trend spearheaded by Germany and Austria.

The kits can be used at home, without help from qualified medical staff. The user records themself collecting their sample and, depending on the test type, either sends it to a lab for rapid processing or reads in the results through the phone’s camera. If the test is negative, the platform issues an official certificate. The app currently supports antigen and PCR tests, with work on antibody tests underway, and offers third-party developers a robust API for easy integration.

“We are delighted to be working with EU’s leading airlines to make pre-flight testing as accessible, easy, and convenient as possible,” says Veit-Ander Aichbichler, Co-Founder and CEO at testFRWD. “With the delta variant putting the vaccines to the test, rigorous testing is crucial not just for reopening skies, but for protecting global health as well. At the same time, travel and tourism are vital for local economies, and to foster those, testing has to be made entirely frictionless, which is our mission.”

“Travel and tourism were among the worst-hit in the pandemic, and testing is a key component for revitalizing them,” says Hennes Weiss, Founder and Chief Marketing Officer at testFRWD. “By using AI to make testing a matter of minutes, we help those whose wanderlust went on overdrive during lockdowns as well as ailing businesses. While our solution is currently only available on flights within the EU, its adoption will grow as more countries wake up to the potential and safety of AI-based test certification.”

Founded at the peak of the pandemic in Austria, testFRWD built an AI-enabled platform for at-home COVID-19 testing and certification. Its identyME app relies on a multi-component security architecture relying on QR codes, digital fingerprinting and facial recognition to prevent fraud and use of counterfeit test kits. It supports multiple test types, including rapid antigen tests delivering the results in just 15 minutes, and has already been proven effective in a pilot run in Vienna. The platform was designed to make mass testing more accessible and frictionless and bolster the travel and event industries, badly hit by the pandemic. For more info, visit https://www.testfrwd.me/

identyME is an app developed by testFRWD, an Austrian self-certified COVID-19 testing platform, in partnership with Yoti, a London-based digital identity company. The app is the first solution built on the standards by the International Commission for Digitalisation and Standardisation of Testing. By using its advanced AI capabilities, including facial recognition, the app verifies the user’s identity as they record themself using a compatible test kit and issues a certified result. While making at-home testing as simple and frictionless as possible, it also features robust security functionality to prevent fraud and counterfeits. For more info, visit http://www.identyme.app/